Growing up, I could not put the books down and I waited with anticipation for all the movies. Actually, I am a major geek when it comes to both, Harry Potter and Lord of the Rings.

This fact made it impossible to say no when Amanda from A Dangerous Business, asked if I would be interested in a spending a weekend at The Wizarding World of Harry Potter in Universal Studios Orlando to cover the Harry Potter Celebration. 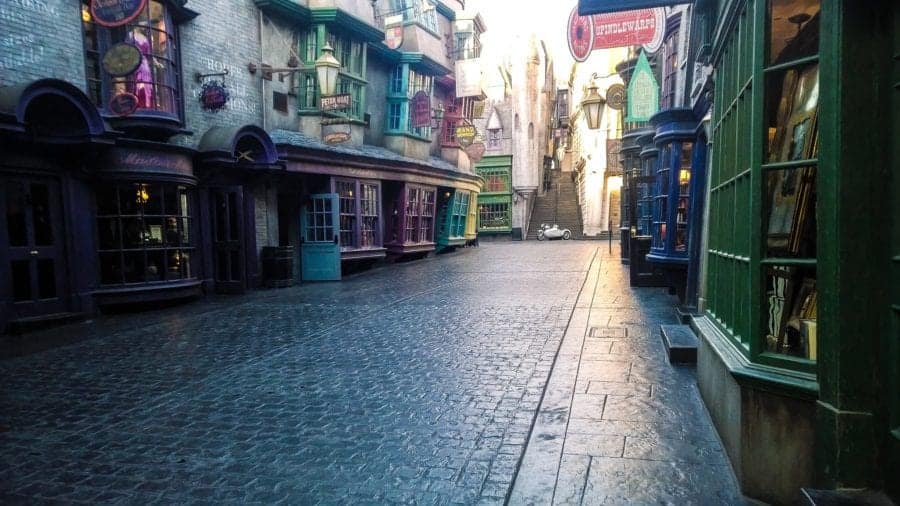 Universal Studios spared no expense when recreating one of the most popular locations from Harry Potter. Strolling on the cobblestone of Diagon Alley transports you into the magical world of Harry Potter.

There are shops to go into, butter beers to drink, and even the Leaky Cauldron to dine in. In the distance, you can see a tormented fire-breathing dragon looming on top of Gringotts Bank.

One of the coolest things about the wands is that they are interactive with The Wizarding World of Harry Potter………but more on that later. 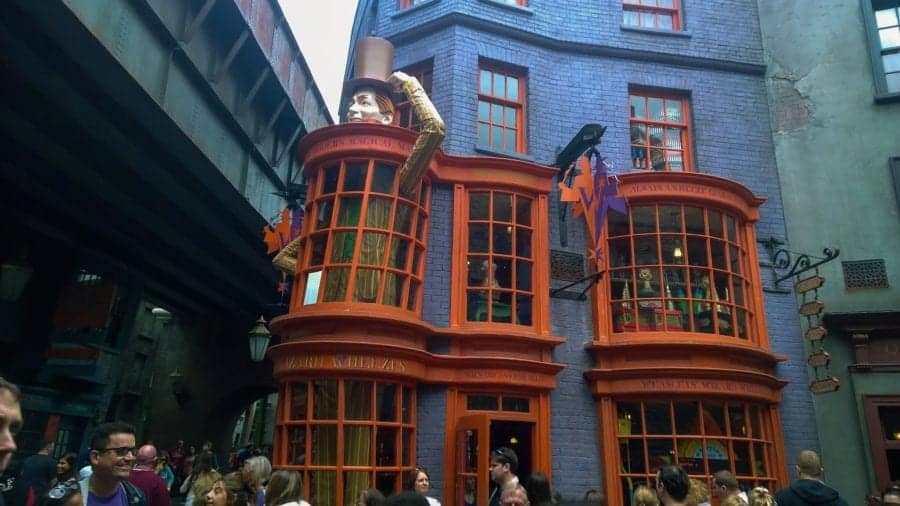 As you enter Diagon Alley, Weasleys’ Wizarding Wheezes greets you on the right-hand side.

This is Fred and George’s joke shop, and one Harry Potter Shop you have to go into. Walking into the vibrant atmosphere of the shop, they are practical jokes lining the walls including a Cycling Dolores Umbridge and Extendable Ears. 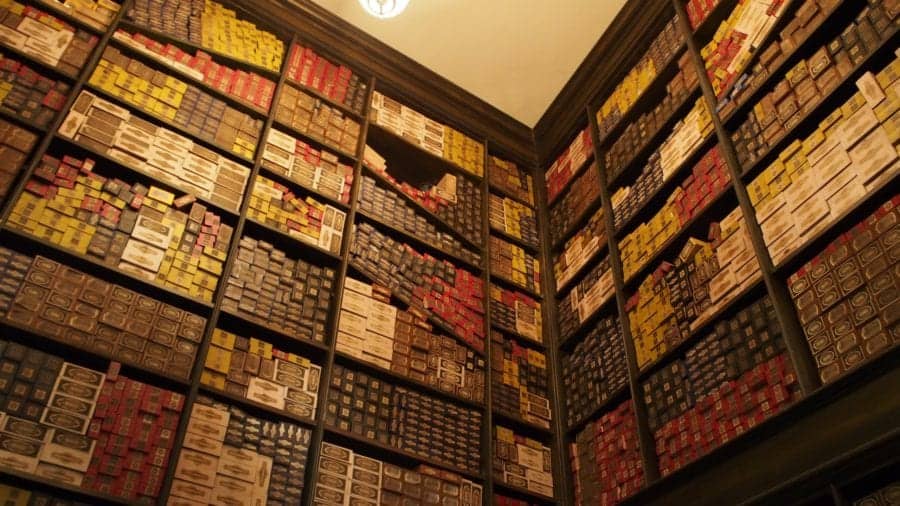 Both muggles and aspiring wizards rush to Ollivanders Wand Shop. Walls of wands are overflowing from all sides.

They have wands from popular wizards and witches for sale. A unique twist is finding a wand that fits your personality.

Hanging on the walls are charts describing the personality traits that correspond to different types of wands not seen in the movies.

Ready to have your mind blown? The Wizarding World of Harry Potter is so magical, it has places you can cast spells. No joke!

Throughout both Hogsmeade and Diagon Alley, are little gold emblems on the ground giving directions on how to cast a spell.

Wave the wand and magic happens before your eyes! A few spells include making it rain, lighting chandlers, and shooting water out of a fountain. 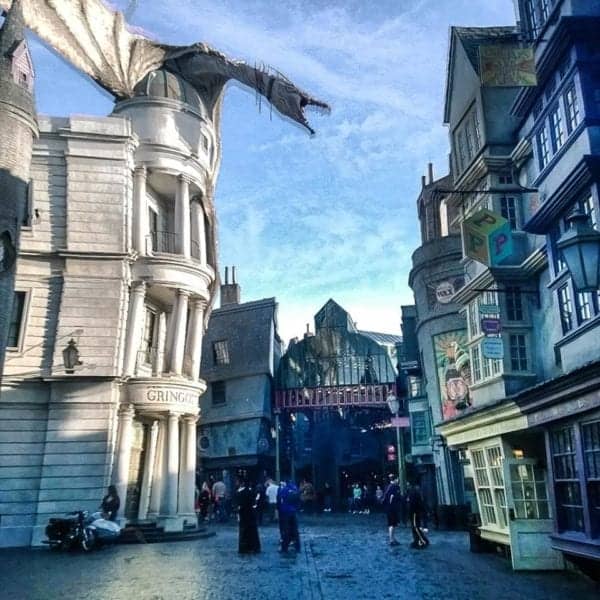 I wish I would have caught more than just a few fleeting glimpses of the performances.

In Diagon Alley, they were telling the story of the Deathly Hollows with puppets that resemble the cartoonish style from the movie. In Hogsmeade, they also had the Hogwarts Frog Choir putting on a show. 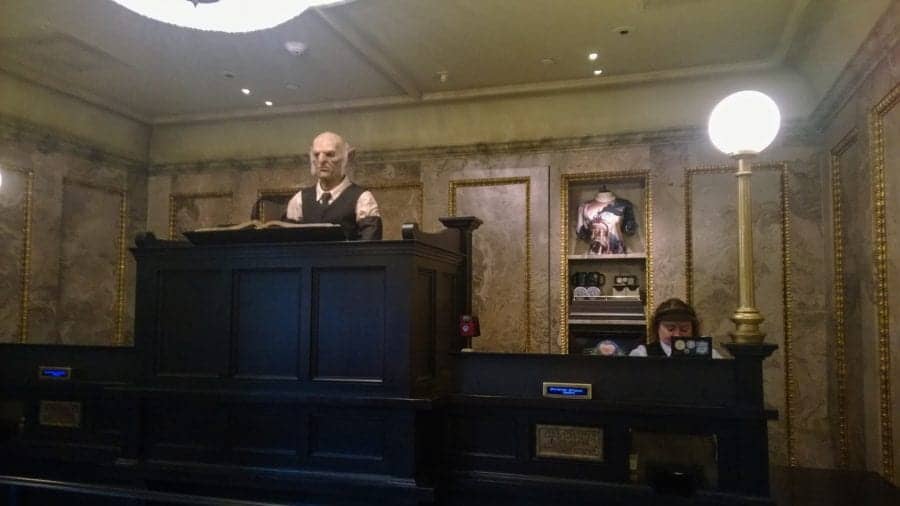 A nice touch is that you can exchange money for galleons. However, they’re not the coin galleons from the movies, but rather galleons notes.

Before walking in, I imagined myself walking out of the money exchange with a bag full of galleons ready to spend them in Diagon Alley. Instead, I walked out slightly disappointed with a handful of bills that resemble Monopoly money.

The money is accepted all throughout the park, and while it is not as cool as I thought, it was still nice little touch for a muggle like me to enjoy.

A small offshoot from Diagon Alley is Knockturn Alley, where the evil wizards and witches hang out. Nocturne Alley also lives up to its name and is completely pitch black.

You can also visit infamous Borgin and Burkes to see the vanishing cabinet.

Eat a chocolate frog, try a pooping Fizzling Whizbee, and test your bravery by eating a handful of Every Flavour Jelly Beans.

Honeydukes candy shop has treats for young wizards and older muggles that will satisfy every sweet tooth, and in some cases, like when I got an earwax flavored jelly bean, distort your face. 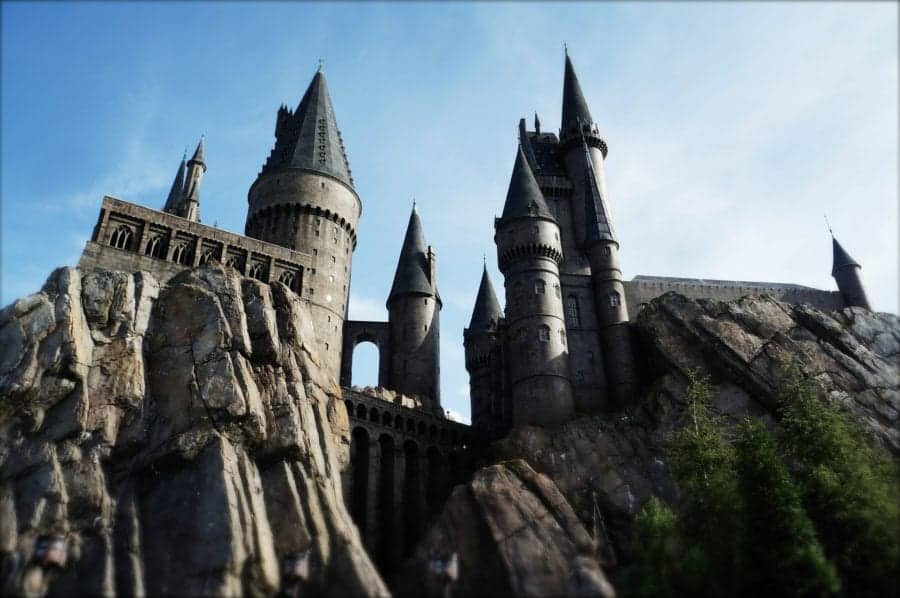 Hogwarts is both a ride and an attraction in Universal Islands of Adventure.

As I am discussing the rides later on, we will just focus on the attraction part of the castle which takes place as you are waiting in line.

Hogwarts is very entertaining. As you walk through, the pictures on the wall talk.

In one room, there is a light snowfall from a misplaced spell. Harry, Ron, and Hermione use the cloak of invisibility to sneak onto the balcony and talk to you.

It is the only time in my life where I have disappointed because the line was moving too fast.

In the Harry Potter Universe, Moaning Myrtle is a ghost that hangs around the bathrooms bothering people.

The bathrooms in Hogsmeade are no different. As you use the bathroom, Moaning Myrtle nags you endlessly.

It is not a massive part of the park, but just shows you how much detail Universal Studios put into making this experience memorable for Harry Potter fans.

Rides at the Wizarding World of Harry Potter 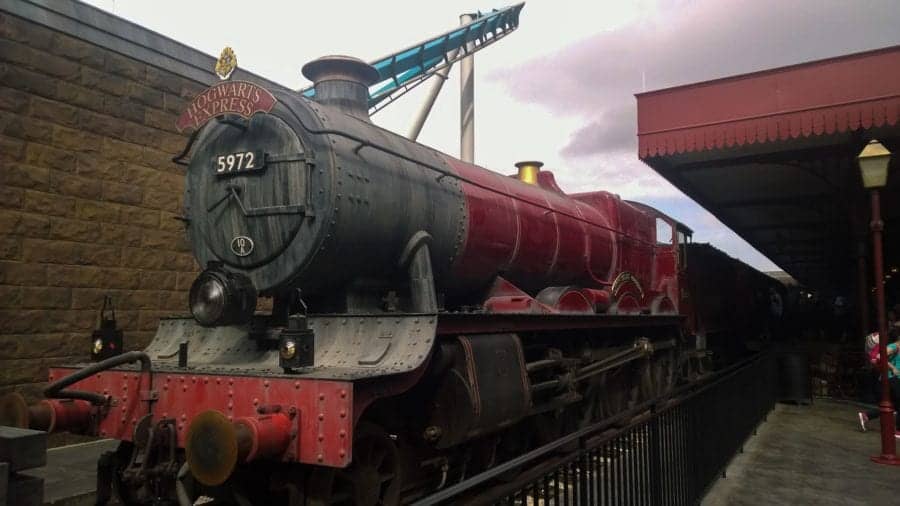 This isn’t so much a ride as an experience. It also is the easiest go between Diagon Alley and Hogsmeade.

As a bonus, it is also the quickest way to get from Universal Studios to Islands of Adventure. The ride is simple and entertaining.

Harry Potter and the Escape from Gringotts

This was my favorite ride in the park. Rides nowadays are much cooler than when I was a kid.

Harry Potter and the Forbidden Journey

This is another insanely immersive ride. You are taken on a magical journey flying around Hogwarts while being chased by a dragon.

Both the Hogwarts castle ride and the Gringotts ride are a mixture of a roller coaster and an interactive experience.

This was Amanda’s favorite ride at Harry Potter World!

Flight of the Hippogriff

A fast and entertaining roller coaster for kids and adults.

Note: Entering the roller coaster also lets you see Hagrid’s house which you can’t enter, but view from the outside.

The Wizarding World of Harry Potter is a fantastic experience for fans of the series, American Backpackers, and families on vacation in Florida. Universal Studios does a fantastic job of magically transporting you into the both Hogwarts and Hosmeade.

This was just a few things I loved about Orlando. Now I’ll just have to wait till the Harry Potter Wizarding World California opens up! Because it is destined to by one of the best places to visit in the United States.

What is the first thing you would do at The Wizarding World of Harry Potter?