“Today was the day”, I thought, “time for swimming with dusky dolphins in Kaikoua”

My arms were crisscrossed on the railing and my eyes were glued on the pod of dusky dolphins swimming next to the boat. A dozen dolphins are enough to make a pod, right? It can only make one of the most beautiful places in the world even better!

The dolphins eagerly sliced through the water, keeping pace with the boat, surfaced every once in a while as if to say, “Hey….. hey you. We’re right here. Come on in; the water is fine”.

They looked so lovable and friendly that my initial instinct was to wave at them. My face reddened, and small beads of sweat ran down my face as I fought the urge. I kept reminding myself that dusky dolphins don’t have hands to wave back. In fact, dolphins don’t even understand the concept of a wave.

Furthermore, the boat was filled with people who did understand the concept of a wave and were aware that dolphins don’t.

To distract me from waving at dolphins, I turned my attentions to the surrounding landscape. Craggy mountains surrounded me on both sides. The majestic peaks had a reddish tint, while the entire area encircling the mountain range had a blue hue. It was as if they were so captivating that even the sky was drawn to them. Vast and craggy, they towered over the pea sized town of Kaikoura. Even by New Zealand’s high standards, this view was impressive.

My eyes widened, and I took a deep breath as I often do when committing a moment to memory.

“Gear up, we are going in,” came a call from the back of the boat.

I pulled down my mask and adjusted my wetsuit which was a little too snug for my liking. “Due to the sheer amount of the Tim Tams I had consumed in a week”, I thought. My flippers flapped on the deck with each step as I waddled to the back of the boat to join my fellow Haka tour mates.

Somehow through the mess of masks and snorkels, I could pick out smiling faces.

The boat kicked into low gear and began to slow. In a few mere moments, our playdate with wild dusky dolphins was about to begin!

As the guide went over last minute rules and tips, we sat there on the edge of our seats like students counting down the last few seconds before the start of summer break.

I couldn’t take the excitement and started shaking my foot; my fin echoed against the boat as if I was doing the world’s worst thumper impression.
Suddenly the whistle blew, and we got the signal to dive in.

Waves of tourists collided with waves of water ushering in our spectacular day.

“First things first,” I thought, as I took a minute to adjust to the water and fiddle around with my gear. My first look around only showed my buddy James inches away from my face. I was taken back. “A Scottish police officer dog paddling off the coast of New Zealand was definitely a rare site,” I thought, “but not exactly what I was after today.” I quickly dismissed him and took in the rest of the area. 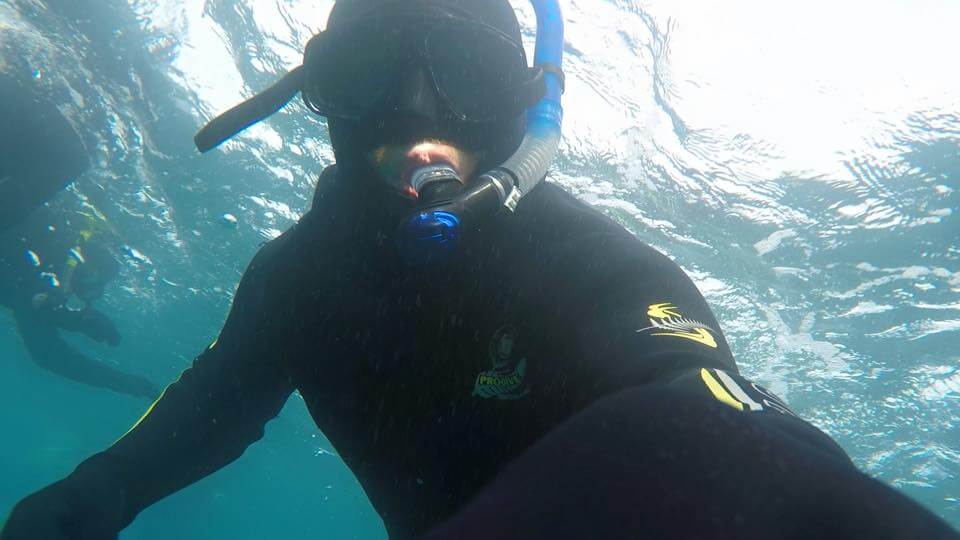 “Did they tell us to swim right or left?”, I asked myself.

Shrugging, I thought, “Um, left looks good,” and I began kicking my fins in a desperate effort to cover as much ground as quickly as I could.

A Dolphin Encounter tip to attract Dolphins was to make high pitched noises in the water. Dusky dolphins are curious creatures. If they find something interesting, like strange sounds, they quickly swim to check it out.

Now, let’s pause for a second so I can embarrass myself and give you a tiny glimpse of how my thought process works.

My plan was to take these nosies to the next level by making the craziest high pitched noises these dolphins have ever heard. That would not only draw the dusky dolphins but also make me stand out from the crowd. Am I right?

To understand the noise I was making you first need to picture a yodeler on a mountain belting at the top of his lungs out. But this was no healthy, hardy yodeler. Instead, this yodeler is on death’s doorstep. He had climbed into the mountains for one last good yodel. Now imagine this deathly ill yodeler grew bored with yolding and instead developed a new found interest in attempting bird calls.

That is what I sounded like; a sick yodeler making bird calls.

In fact, I ended most of my calls with indecipherable syllables like gurrrararara or bahwehi.

Now I realize this sounds rather bazaar, but this was my strategy, and even though the sound was gut wrenching, I was sticking to it.

It worked! Within moments, three or four dusky dolphins encircled me. One Dolphin was a little more curious than the others and swam slowly within just inches of my face. I am not a dolphin expert, but the way he looked at me, gave me the impression he was thinking, “Does this dude need medical attention?”. As my eyes widen and filled my goggles, we stared at one another for several moments. 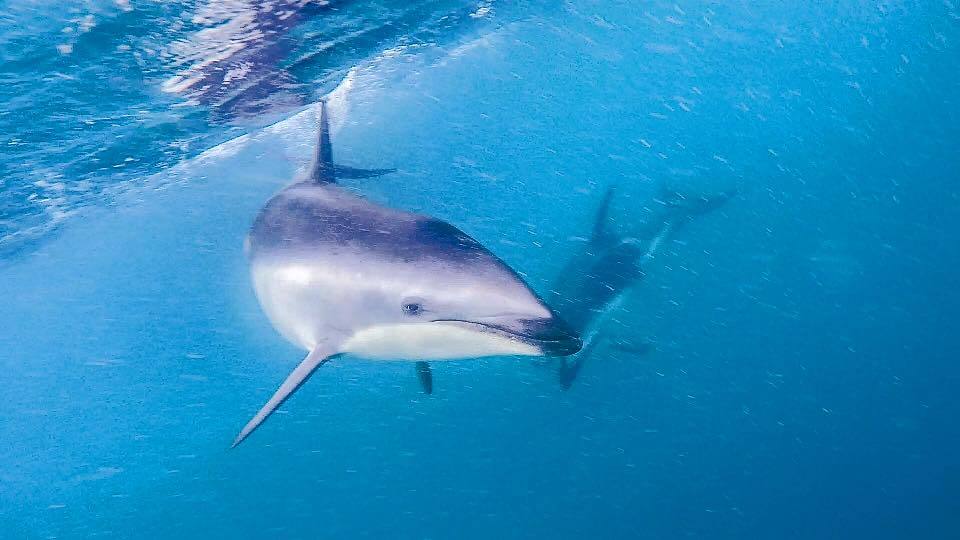 It was one of those rare moments in life where reality blows your expectations out of the water and I did the worst thing you can do when underwater. I gasped!

I tore to the surface and promptly began coughing up a lung. Catching my breath as quickly as I could, I dove back down to see that a few of them were still checking me out.

These creatures are amazing; so beautiful as they swam through the water with lightning speed yet elegant grace. I felt such an out of world intimacy and then all at once they darted off into the distance. I began yodeling in a desperate effort to lure them back with my siren’s song. Sadly, they didn’t return.

After a moment, I popped out of the water and started looking for someone… anyone to tell what happened…..but, I found myself all alone.

Putting all my focus on making the strangest sounds the Kaikoura had ever heard, I had swum left while everyone else had gone right.

As I swam towards a crowd, I noticed heads were whipping about. “Dolphins must be there”, I thought as I approached the group. Within seconds, I was enveloped by the out of sync choir of high pitched sounds and lots of dolphins.

Everyone was spinning and flailing around trying to get the best views. We were all making a complete spectacle of ourselves in a desperate effort to locate as many Dolphins as possible.

Brace yourself for a mind trip. Remember, I warned you earlier that my thoughts often take a crazy path. It is at this point I realized that just maybe humans didn’t quite understand this relationship. Perhaps it is all reverse, and we are actually the entertainment for the Dolphins. I couldn’t help but think that just maybe watching humans from all over the world flop around and make high pitched squeals was the dolphins form of TV before heading off to a day of work.

That somewhere just below us, a dolphin was sitting at a ticket booth, his visor pushed up as he swam back and forth under a sign reading “Swimming with Humans – 1/2 OFF Today Only.”

If that was the case, they were getting their money worth as they swam all around us. Occasionally they would swim off, and we would follow after the pod like puppy dogs.Eventually, they would let us catch up and then swim around us for a few minutes. This went on for about 15 minutes before they darted off for good and we were called back into the boat.

The boat kicked into high gear, tearing through the water as we searched for more dolphins. Soon we spotted them again and jumped back in.

As soon as I hit the water, I was surrounded. They were under me, in front of me, and on both sides. I had dove straight into a pod of Dolphins.

They stayed for few seconds swimming around me playful dipping up and down as they circled me. I was so stunned I forgot to make my high-pitched screams; a fact I didn’t realize until they started to swim away. 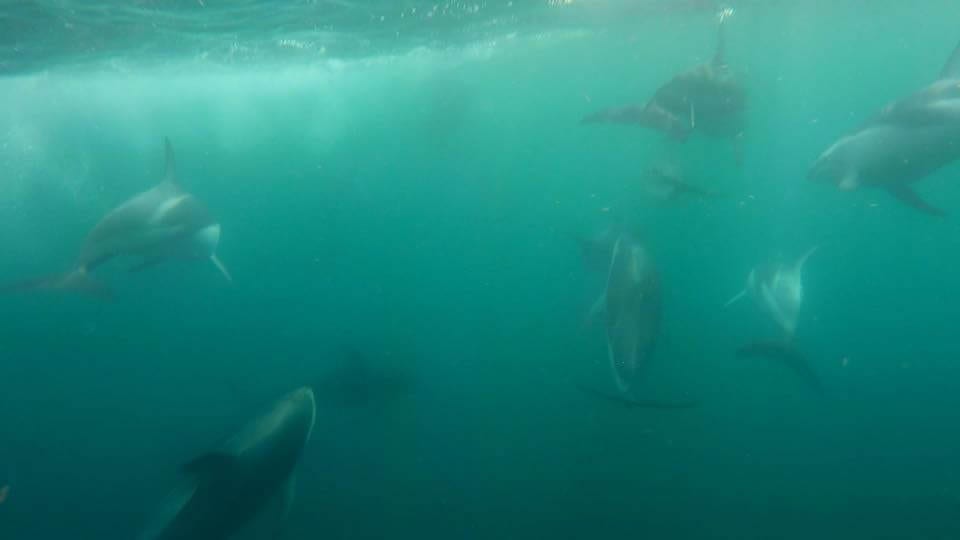 I was taken aback. These creatures were so mesmerizing. Without a doubt, this was my most shocking animal encounter….And I’ve come face to face with a grizzly.

After a couple of hours swimming with the dolphins, the boat started to head back.

We sat on the boat drinking hot soup while a pod of dusky dolphins escorted us home. Every once and a while, one would leap high into the backdrop of the tinted mountains. The day trip was perfect and I couldn’t help but think how beautiful New Zealand is.

Overall swimming with Dolphins is a highlight in my experience traveling New Zealand. It is an experience I recommended to everyone! It’s right up there with hiking the Tongariro Crossing.

Who to go with –  Dolphin Encounters

Tip: Make sure to book well in advance as this tour is very popular and usually waitlisted in the summer months!

Bonus: Swimming with dusky dolphins in Kaikoura is amazing, and becuase I want everyone to share in this experince i have teamed up with Dolphin Encounters to offer 10% off. When calling to book name drop abckpackerstale to claim your discount!

This is also one activtiy you can add on my awesome New Zealand Take Over Tour in March of 2017! Reserve you spot now for $99!  For more check out these awesome points of interest in New Zealand.

What do you think? Would you love to swim with dusky dolphins in Kaikoura, New Zealand?