Once a year, on the night of the summer solstice, the fences around Stonehenge are taken down and people, from all over the world, flock by the thousands to dance, watch the sunrise, and party like the ancient Druids. (Does it ever bother anyone else that people tell you what ancient cultures did? I mean, it would be almost impossible for me to tell you what I did last week.)

The bus roared away as Ryan, my brother, and I found some lockers to store our backpacks and started down across the field to the party. Here we were in one of the most beautiful places in the world.

Ryan was a little more excited than I was, partly because this was his first time backpacking through Europe but also because this Stonehenge party “thingy” was at the top of his bucket list. Not that I wasn’t excited.

After all, an all night party in a 4000 year old monument is a once in a lifetime experience. Sign me up! Hell, we didn’t even mind the rain, extreme wind, and steadily dropping temperature . As we came around the corner we got our first glimpse of Stonehenge. We smiled little did we know what was in store for us.

Stonehenge wasn’t on the top 15 things to cross of my bucket list but nevertheless is a beautiful place, a huge circle of stones jutting up from the earth in the middle of nowhere. You get the sense that if one of them fell over, it would take all the other ones out with it as if someone was playing a gigantic game of domino’s in the English countryside.

All of a sudden, I heard feet shuffle behind us and we immediately were sprung on by a couple of South Africans. To say these boys didn’t have a screw loose would be like saying cake was just declared a health food.

They asked if we wanted our picture taken and before we could open our mouths, one of them jumped in-between Ryan and I, swung his arms across our shoulders like he had just reunited with a couple of long lost friends, and told us to smile. The other one promptly snapped the picture and then started to run off with our camera.

We just stood there looking at one another, eyes wide and mouths gaped open. He started laughing and turned to come back as he said, “Just joking bru.” Then out of nowhere, he whisked out a bottle of vodka, slapped me on the back, and said, “Come on boys; no glass bottles allowed inside. “Chug, chug.” A few minutes later, and more than a few shots, we tossed the empty bottle away as we staggered past the security checkpoint.

The South Africans stopped everyone we came across and pulled us into photo after photo with strangers. As before, they would always act as if they were about to run off with the camera or by this point, stumble off with the camera. Of course, this would be followed by people in as much shock as we had been, only to be followed with more laughter, backslapping, and drinks.

After more than an hour of having my picture taken more than I’ve ever had it in my life, the sun began to set and a group of drummers dressed in colorful, Druid attire formed a circle in the middle of the stones. The rain poured as the beat of the drums drew a massive crowd. People cheered and danced. The party was on!

The drummers beat harder and faster the later it got and before long, complete darkness engulfed the entire area, with the exception being the area inside the stones. The light of hundreds of glow sticks lit the circle in a rainbow of colors. We drank, danced, and lived. 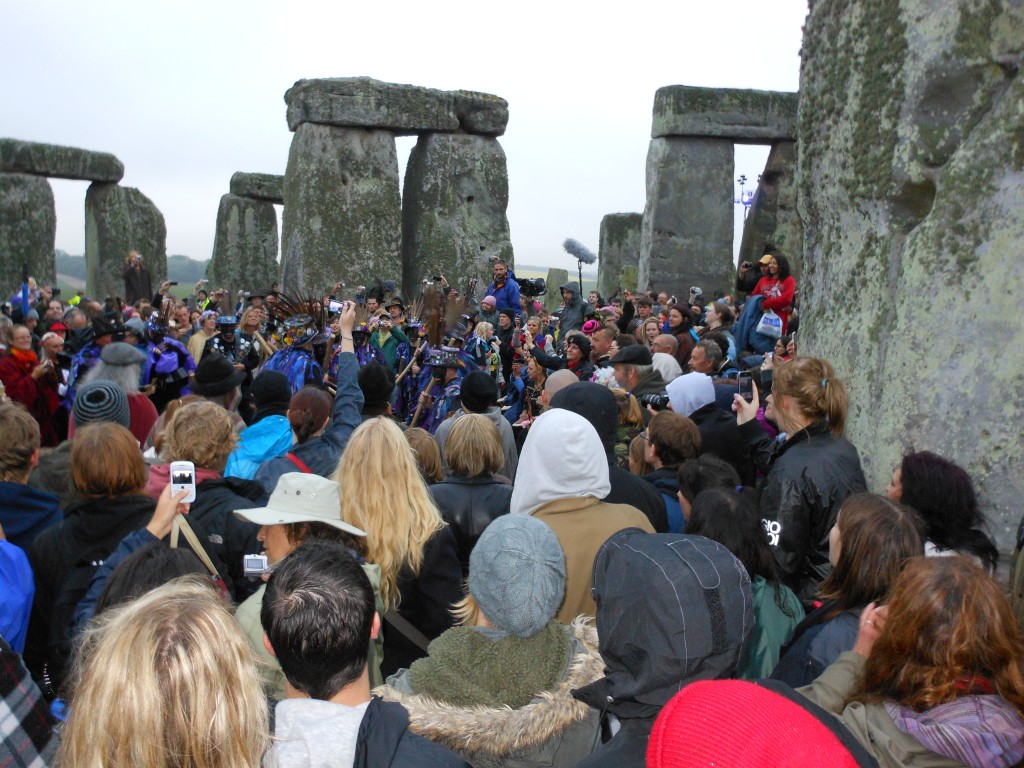 Sometime in the early morning, Ryan and I looked around; we had lost the South Africans in the midst of all the chaos. But we soon gave up on trying to find them.

Beside exhaustion had set in, there was no booze left, and we decided now was a good time to take a break. People who had the same idea as us, littered the area around the stones. I quickly noticed that we were the least prepared (as usual). There were large lumps of people huddled under blankets, sheltering themselves from the rain. I smelled coffee coming from a group of people, each wearing twelve layers of clothing.

They sat in their lawn chairs as they chatted. Their insane amount of layers made them look like a bunch of beach balls. Even the most unprepared people had proper rain ponchos and sat huddled throughout the field. I looked at Ryan and then at me. We were wearing T-shirts soaked in rain and sweat. Suddenly, I realized how cold it was and I felt the sting of goose bumps as they appeared.

My teeth chattered while I silently cursed the people sitting in their chairs with their hot coffee, and obscene amount of layers. I quickly unzipped my day pack. Inside we only had a hoodie and the cheapest plastic raincoat money could buy. “We are screwed,” Was the firstthought to come to mind as I threw on the hoodie and Ryan, the raincoat.

We cozied up to a wonderful littlespot, it even came with it’s own mud spa, against one of the pillars of Stonehenge. We did mind the rain now. Then began one of the coldest nights of my life.

In the background we heard people cheer to the drums as we leaned against the brutal rock. We were shivering so hard it made an actual sound. I could feel my brain drift into auto-pilot mode, and I knew thinking wasn’t an option. It was too cold to sleep, too wet to eat, and to muddy to get comfortable. Every couple of hours, we forced ourselves up for a quick walk to get our blood flowing.

On one of these forced marches, I saw an unused trash bag caught in the wind. I ran (possibly the fastest run of my life to date) and pounced on it. I quickly ripped two arm holes and pulled it on. Ahh impromptu rain gear. My breath formed a white wall in front of me as I slumped back down against a Stonehenge stone. I hadn’t been that cold since Alaska I bundled up and thought,

“This is it. This is how I go out, as a human popsicle leaning against Stonehenge. I wonder if that had happened to any of the ancient Druids or if this was a first for mankind! (People have died in worse ways).

I was sitting there imagining how ridiculous the newspaper headlines would be covering my death, when Ryan nudged me and gestured to a few rays of light on the horizon. I shook off the thin layer of frost that had settled on me and forced myself up. We headed back into the stones for the final hours of the party. As I walked into the stone I was shocked. I’ve been known to party hard, but these people were out of control.

Hundreds of people were still standing around. Some wandered around and hugged the stones; others were too drunk to know they were too drunk and tried to climb to the top of the stones while security quickly rushed to pull them down. Apparently we weren’t the only ones whose brains were on auto pilot. Adventure quotes kept running through my head, trying to maintain focus and not freeze to death.

The rain started to let up and I started to defrost with the morning sun. Maybe I would survive after-all. We bummed a couple of beers, opened up our liquid breakfast, and sat down to watch the sunrise at Stonehenge.

The only way to describe the sunrise… gorgeous. There is something magical about standing in Stonehenge with a group of thousands watching the sunlight slide across the English countryside and into the stones, and with the new sun the horrors of the night before were forgotten

After reading this, you are probably thinking. Who would someone subject themselves to that? Well ……. me. In fact, I am doing it again this summer. Yes, certain parts clearly sucked, but only because it was unseasonably cold, and we were unprepared. Overall, it was a great night and it became one of my favorite memories of Europe.

Although next summer, I am following these tips to avoid any more mishaps.

At 21 I fell in love with travel. Since then my adventures have taken me to over 80 countries in 8 years.

Read 101 Fun and Interesting Facts About Me

Become a Better Traveler From Your Inbox