Japan has been a dream destination of mine for years. I’ve always felt pulled towards the craggy mountains, fresh food, and rich culture that has made the country famous among travelers.

That same pull is the reason while I’ve not visited Japan until recently. I was scared that my expectations of the country were too high that Japan could never live up to them. Man, was I wrong; and while my visit was shorter than I liked it only increased my longing to go back and explore more of the country. 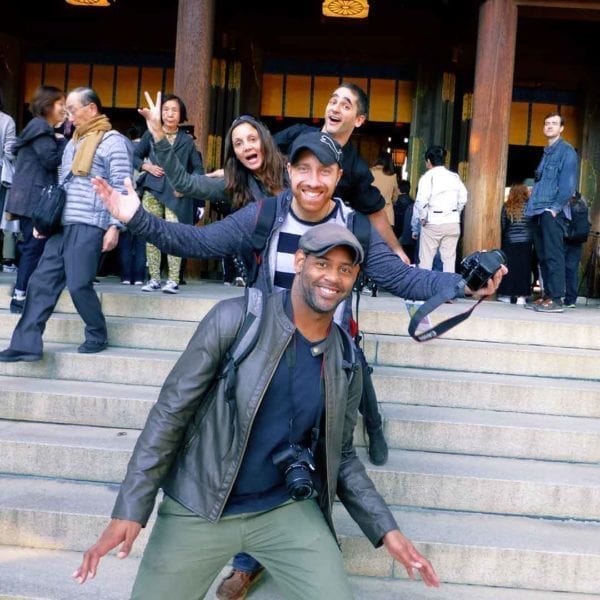 Landing in Tokyo, after a 14-hour flight, I knew I had to keep my energy high in order to combat jet lag. After checking into my room, I threw my bags down, chugged a coffee, and immediately headed into the heart of Tokyo.

How to spend 48 Hours in Toyko

I only had 48 hours to see the city and I were determined to make the most out of it. The next two days was a beautiful whirlwind as I saw and experienced everything I could in the city.

This is the route I took, and it’s an excellent route to follow if you have limited time in this bright and lively city.

My first stop in Tokyo and my introduction to Japan was Asakusa Market. This is a famous street market for tourist, and locals visiting Tokyo. I admired the matching white and red shop decorations. I stopped check out the soft silky Kimonos and the hand engraved rice bowls the were ornately decorated.

My nose caught a sweet scent in the air. My eyes widen as I turned towards a corner shop. There windows filled with fresh cookies. A man sat over a stove filling a cookie cutter at the end of a cast iron pole and placing it over the fire.

I knew I had to try the Ningyo-Yaki he was cooking. Ningyo-Yaki is a cookie filled with a red bean paste called “Anko”. I couldn’t say no as my friend Ms. June bought us a bag.

Another traveler wandered up to us asking what we were eating. It turns out he lives an hour from where I grew up in Ohio. It was the first of three people I met on this trip that lives within a couple of hours from where I grew up. It always amazes me what a small world we live in.

We snacked wandering through the rest of the brightly colored stalls. I wanted something to remember my first day in Japan and found perfect chopsticks set that was under $5.

Ms. June also bought me a fancy Tenugui, which is a multi-purposed dyed cloth which is used for things such as hats, greeting cards, or wall decorations.

Asakusa is a fun, and lively market and a fantastic place to get best gift for a traveler, or even a couple items for yourself.

At the end of the market is Asakusa Shrine or better known as Sanja-Shrine. This is one of the most famous Shinto shrines in the city.

Asakusa packs in shopping, treats, culture, and a Shinto Shrine into one stop. This makes it a must when visiting Tokyo. 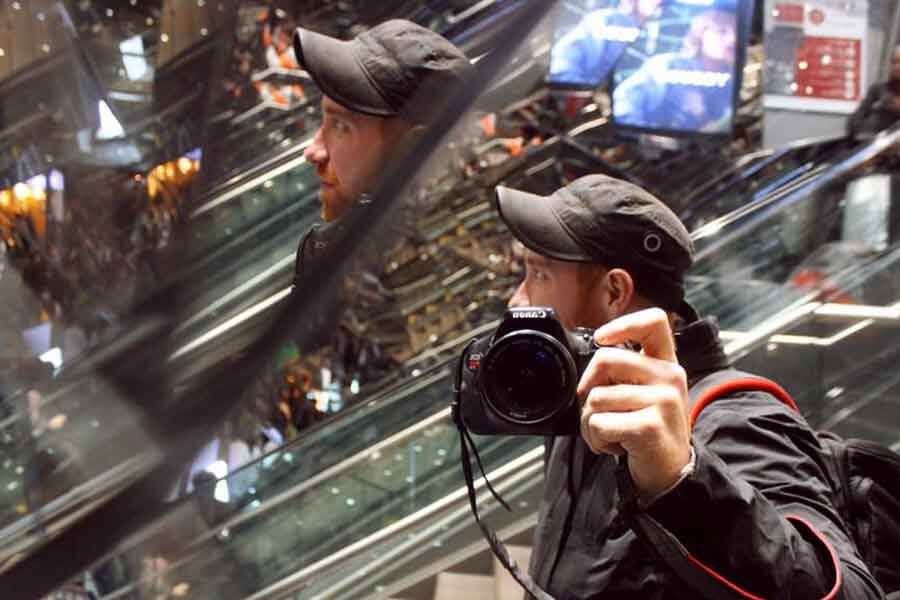 Our next stop was Shinjuku right in downtown Tokyo. It is a major gathering hub in the city. Neon signs brighten the streets as waves of people shop, eat , and mingle.

The atmosphere is vibrant similar to Times Square in New York (Times Square is also the source of some of the best quotes about New York). We spent an hour wandering the shops and hunting for the best view of the downtown. 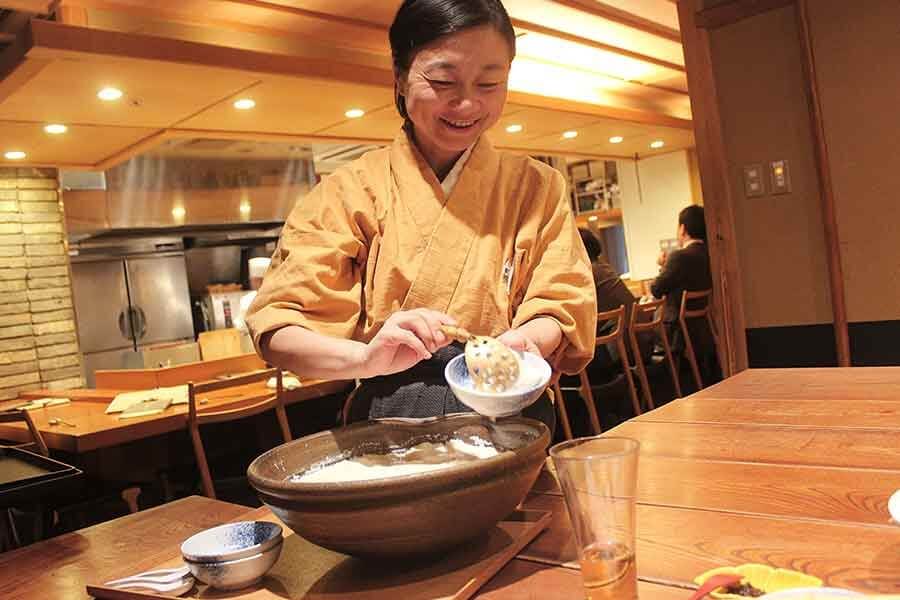 Not far from Shinjuku is Raku, an amazing local restaurant. Being my first dinner in Japan, I wanted to try everything. Some core principles of Japanese culture is a deep level of respect and perfection.

Every task is done with the attitude of mastering it. It brings quality and care that shows throughout the entire country. One that we don’t seem to have in America.

This carries over to food as well. You can see the love they put into preparing the food from the way the meals are cooked to how they are presented. The food is flavorful and fresh. Everything from the tofu to the Miso Soup was cooked perfectly and presented beautifully.

This attitude towards food is probably why Tokyo has over 226 Millen rated restaurants, and some of the best food in the entire world.

The courses were endless, and I enjoyed ever bite.

The next morning my first stop was Ginza. A lovely area of the city to explore. Ginza is where you can find the world renowned Sushi Chef Jiro Ono. The part of Tokyo is famous for its high-quality shopping and restaurants, and there are some great quotes about Japan that refer to Tokyo..

While it caters more towards the luxury crowd, Ginza is still a beautiful area of the city to walk around. There are some restaurants, shops, and entertainment that won’t break your budget. My favorite part of my afternoon in Ginza learning the basics of Origami.

Next, I ventured to my favorite area of Tokyo. The Meiji Shrine. Emperor Meiji is one of the most well-known Emperors in Japanese history. This Shrine is dedicated to him and Empress Shōken. Meiji is the beloved Emperor from the 18th century who took Japan into the modern era.

We walked through the lush green gardens, and through the uneven maze of trees. The dirt paths led us beside a little pond. Catfish excitedly swam in circles waiting for crumbs. Walking through the shrine and gardens you fill the overwhelming love and affection they have for Emperor Meiji.

After about 20 minutes we reached the Shrine. A massive building complex full of engravings and decoration.

We paid our respects to the Emperor as a white-clad bride, and her wedding procession zigzagged through the crowds.

Making my way down the stairs, I filled out my first Ema. An Ema is a prayer or wish written on a wooden tablet. The Ema hangs on the wall until a monk reads it, he then prays for your wish before burning the tablet as an offering to God. I wished from good health, success for my blog, and peace.

It was mid-afternoon now, and I was cutting it close as there were still a couple of things left I wanted to see.

Hopping in a cab to save on time we rushed to Nezu Museum. Bright reds, crisp yellows, and mossy greens bathed the beautiful gardens outside. Strolling the stony paths I lost myself admiring the statues.

Over a babbling brook quaint tea houses poked out of the foliage, barely visible through the forest full of red and yellow leaves. I quickly fell in love with this garden and could have easily spent another hour there.

By the time we headed got to Takeshita Dori market the sun was down. This market is filled with little knickknacks, trinkets vibrant neon signs, and has everything from furry panda hoodies, to green tea kit kats.

Our dinner was enjoyed in a traditional Japanese Restaurant. We sat crossed legged in a room as once again I stuffed myself to a never-ending amount of mouth-watering food. My favorite was the potato and cheese stuffed crochets with a raw egg yolk to dip them in. I ate at least 5 of these bad boy.

While I only had 48 hours in Tokyo everything I saw, tasted, and experienced made me fall in love with it. It is a city I have barely scratched the surface of and one I can’t wait to explore more.