Scotland is a land full of myth and legends. From Elven, king of the fairies, who has the power to give your face eternal youth (if you are brave enough) to Rob Roy Macgregor who refused to change his last name even when it was illegal,  turning him into one of the most well-known out laws in history. With all the  fun legends that surround Scotland it is hard to tell fact from fiction. But I know of one indisputable fact. The evergreen highlands, and their numerous Loch’s are breathtaking! Without a doubt Scotland is one of the most

My brother and I were lucky enough to visit Scotland for a couple weeks. For our trip to the highlands we went on a Haggis Adventure Tour. Which was a great chocie, and one the best ways to see the Highlands. Our tour guide Kyle (big shout out to him) kept asking us if we were feeling the DSL (Deep Scottish love). I think we were feeling it the moment we arrived for out first weekend in Edinburgh. I quickly feel in love with the city and with the highlands above it. My only regret in Scotland is that I barley got to scratch the surface of the lowlands, which makes going to back for another visit a high priority. It is in Scotland that I started to play around with the decision of being a full time traveler, and so Scotland holds a special place in heart.

Do you think you would feel the DSL? Look at these pictures and tell me! 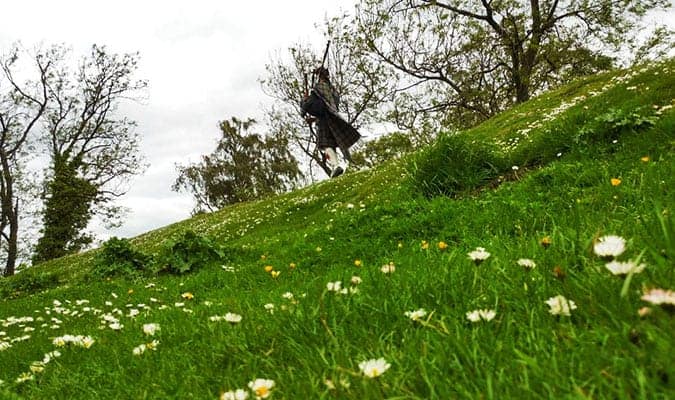 This is a Scottish bagpiper playing his eerie tunes at the monument of William Wallace in Stirling, Scotland. This is were William Wallace won one of his greatest victories. (In the movie Braveheart it is the battle where they defeated the charging horses, but really the battle happened on a bridge) 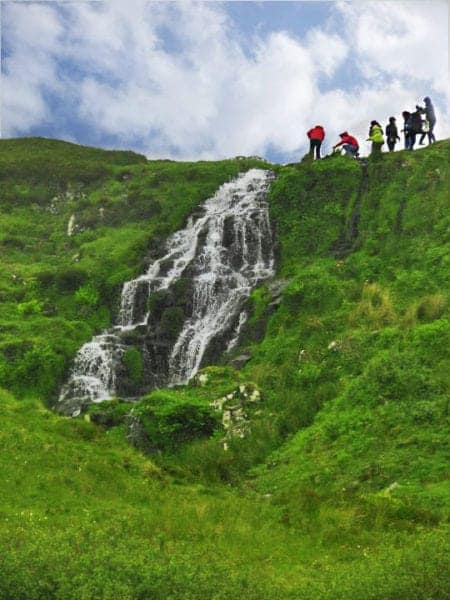 The water is so pure in the Highlands that you can stop, and refill your water bottle at any one of the mini waterfalls in the highlands. Also who legend says that the first person to climb the hill the fastest, get a drink and make it back down without swallowing  it would be granted a wish by Elven. ( On a side note, I was totally winning the race until one of my flip flops broke on the home stretch!)

This is the most confusing sign I have ever seen. What does it mean? Is it talking about a man eating a piece of chicken or a giant chicken that eats men? Either way why are they advertising it? Curious right? It still bugs me to this day! 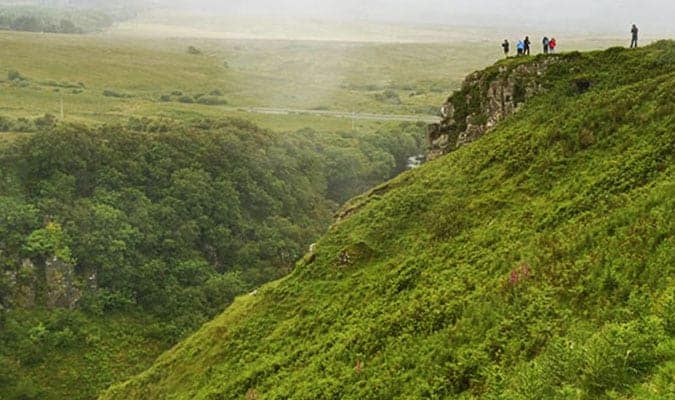 I could have stayed at this place all day! Pictures like this remind me why I travel. 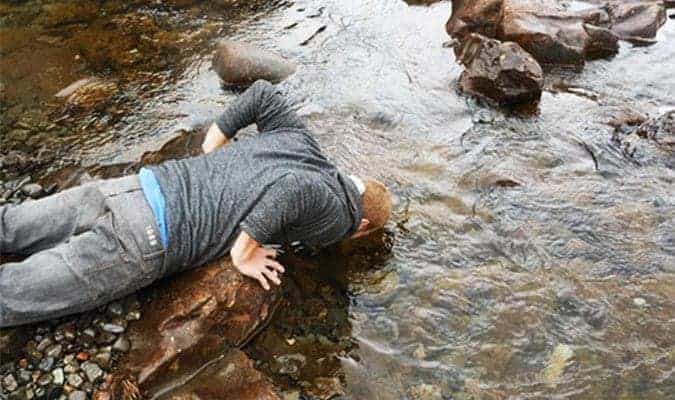 This is home to Elven the mischievous fairy king. The legend is that if you are brave enough, and dunk your face in this freezing cold water for 5 seconds you face will never grow old! Unfortunately I don’t think that applies to my hair line. Oh well, here I am dunking my face.

We heard stories of a group that came a few months before us and the creek was frozen sold. So they broke the ice, and dunked their faces in. Now that’s commitment! 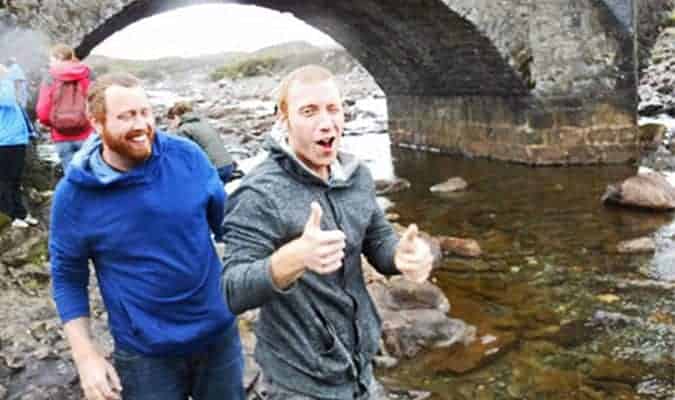 And here I am after. Now I am going to be this handsome till the day I die! 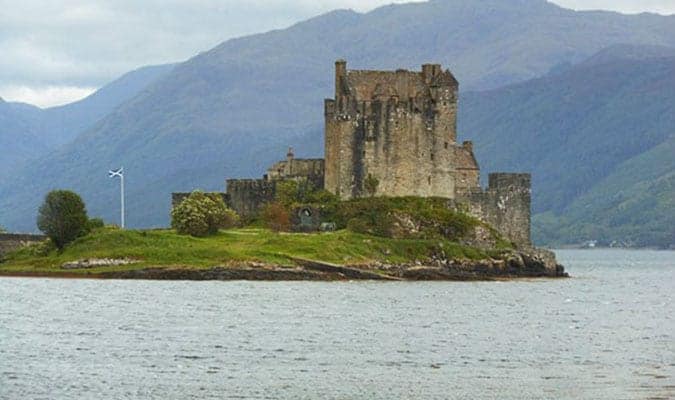 Eilean Donan Castle, is often referred to as the sexiest castle in all of Scotland. It initially purpose was to protect against the invading Vikings, but since Viking raids are in short supply these days, it is mainly used for weddings and films. It has been used in the following films Highlander, Loch Ness, The Private Life of Sherlock Holmes; Elizabeth: The Golden Age, Made of Honor, and James Bond. 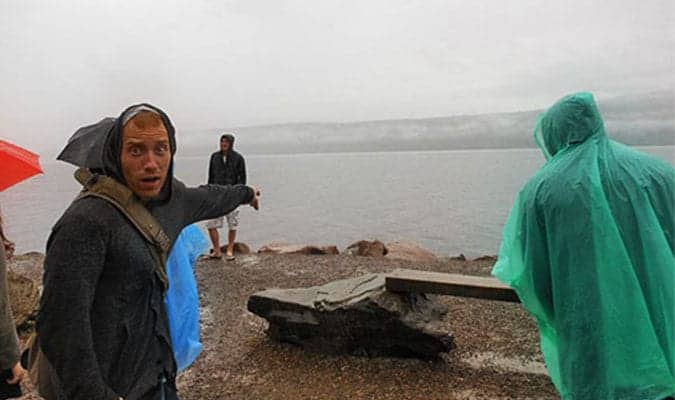 And here we have Loch Ness, the fabled home of the Loch Ness monster. As you can tell from the picture I just saw something! But it turned out to be a log.  We learned in Scotland that Loch, means lake, and the proper way to say it is from deep in your throat like your going to cough something up. 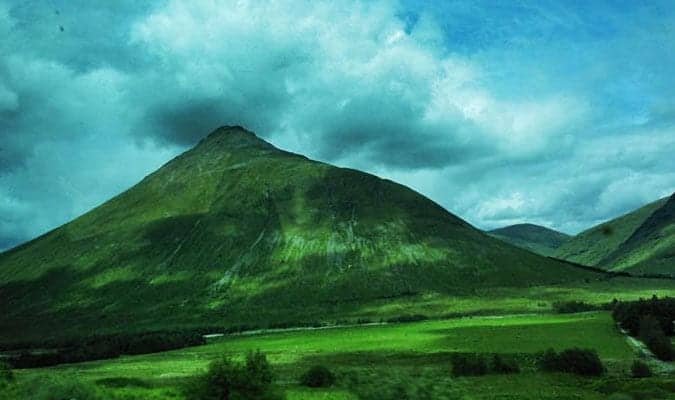 The gorgeous colors of the Highlands never ceases to amaze me. ( You have to be feeling the DSL now!) Scotland is a must when backpacking Europe. and if you get on tours like haggis you can get travel Europe cheaply

So what do you think of the Scottish highlands? Did you feel the DSL? Let your voice be heard in the comments below.