Ireland means more to me than any other country I’ve visited for two reasons. The first is because it’s where my ancestors are from, and I was raised to love my heritage and in turn treat Ireland as the homeland. There is even a castle Ryan! – My mother’s maiden name.

The second reason is much deeper and personal. Ireland was the first country I’d ever visited overseas. That trip changed the course of my life forever. I’ll never forget the moment as our plane descended. I was frozen, looking out the window at the feeble stone fences that were somehow still standing after decades, the battered castle ruins, and the greenest fields I’d ever seen. It was a defining moment. I was instantly in love, and the backpacker in me was born. Everyone should visit Ireland at least once.

Since then I’ve spent months and months traveling to all the best places to visit in Ireland.

From its quiet villages, like Doolin, to its big cities like Dublin; from the cost of rocky coastline of Marlin’s Head to the epic medieval castle of Bunratty Castle, this tiny isle has plenty to offer. It’s an offer too damn good to refuse. Ireland has the power to change lives. I’m proof of that.

So now your planning a trip, and you researched everything you need to know before visiting Ireland.  Let’s look into some of the best places to visit in Ireland.

Places to Visit in Ireland 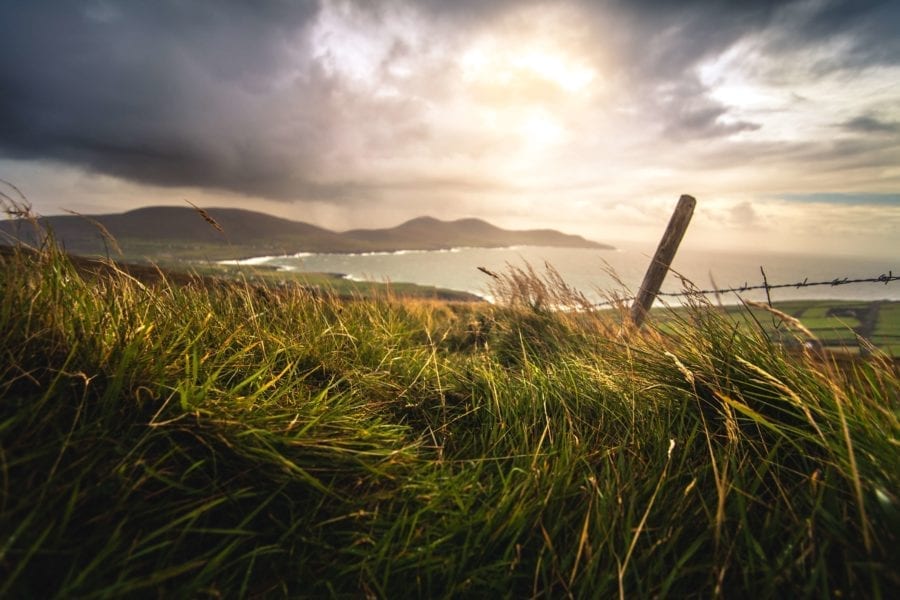 Doolin’s a small village that can have a powerful effect. You can literally walk through the village in mere minutes, but somehow you’ll the memory will last a lifetime. Maybe it’s the strong Irish Heritage Doolin is known for maintaining; maybe it’s the perfect view from the surrounding hills as the sun streaks across the sky before hiding beneath the Atlantic. I think it’s because Doolin is magical. At night, the town heads to the lively pub to drink, socialize, and dance as some of the best traditional music in Ireland fills the air.

Doolin’s also the gatekeeper to the Aran Islands. It’s easy to waste an entire day wandering around the pricy hole-in-the-wall shops full of handmade quilts and sweaters. The islands are spectacular and a perfect way to spend a day. The ancient stone forts of Dún Aengus on the island of Inishmór and Dún Chonchúir on the island of Inishmaan are nestled high in the cliffs, make a visit to the Aran Islands a must. These islands were my favorite day trip in Ireland. 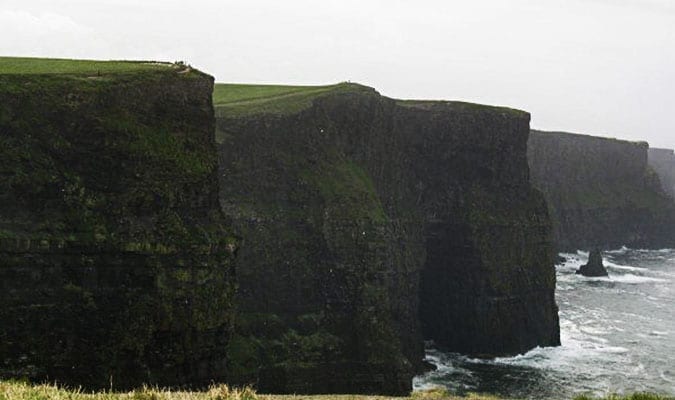 Not far from Doolin are the wind torn Cliffs of Moher. Towering above the ocean at 214m, these cliffs are one of the most visited spots in Ireland. On one cliff you have lonely Obrien’s Tower that adds to the majestic view. 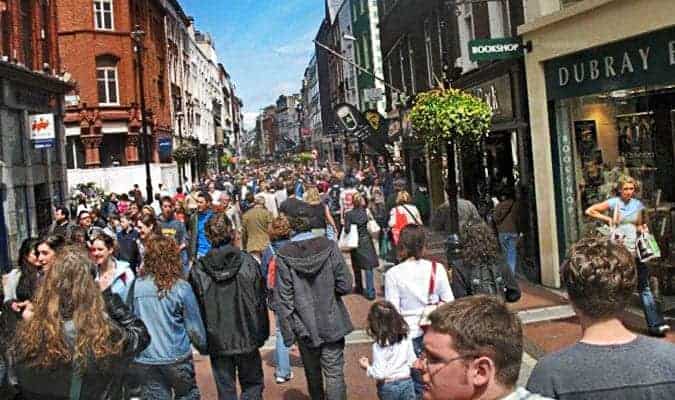 You’ll never get bored in Dublin. I’m not sure if it’s because the Guinness is so fresh you’ll want to rush into every pub for a pint, or because the city is just so damn fun. (Everything’s fun after a few pints of Guinness) Some of my fondest memories in Dublin were chatting with the locals in the temple bar district, walking the ivy green parks, and visiting Trinity College. Combine that with some of the best food in Ireland, makes Dublin a city you want don’t want to leave. 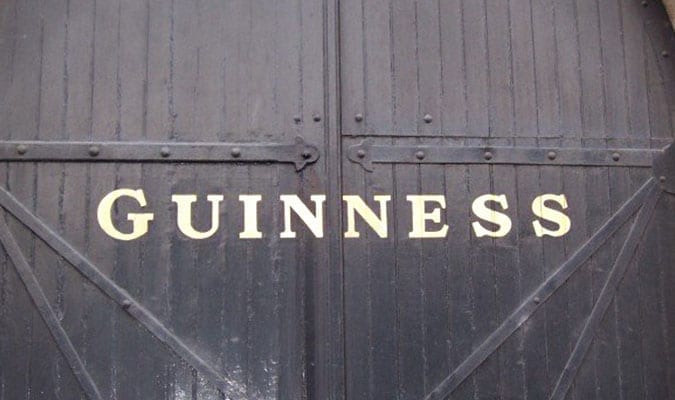 I like beer! I’m also Irish. Need I say more? The Guinness Storehouse is a marvelous man-made achievement. Strolling between the five floors in bewilderment, you will learn the history of Guinness, watch projectors play old black and white Guinness ads (which are very entertaining), and see the massive brewery machines in action. At the end, they pull out all the stops and give you a tall ice-cold Guinness to drink at the top of a sky dome overlooking Dublin. I’m not sure if life gets any better.

The Book of Kells is one of the most well-known books in existence today. Created by monks over 1200 hundred years ago it’s an extravagant piece of art. It is full of complex illustrations and stunning imagery of Celtic knots and early Christian symbols. This masterpiece is kept under glass in Trinity College. 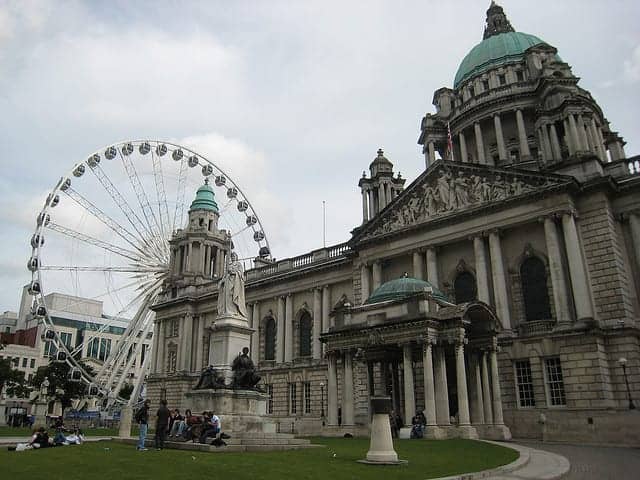 Belfast is the artistic center of Ireland. It’s a city that’s full of life, and you will want to take some time and explore the markets and churches. Located in Northern Ireland, Belfast is part of the U.K. This caused all sorts of trouble in the past, but the commotion has died down over the years. 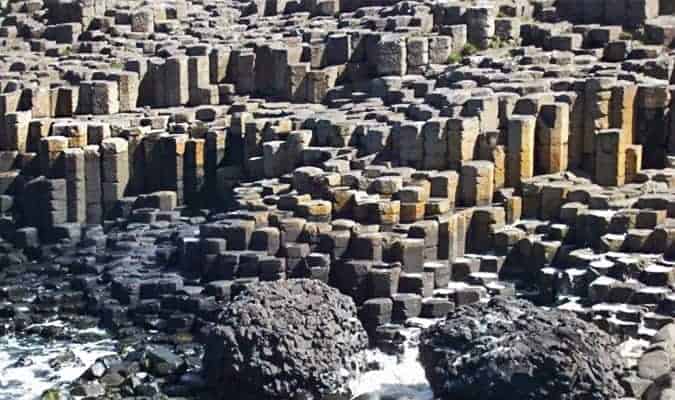 Giant’s Causeway, on Irish Coast, is where over 40,000 honeycombs shaped rocks link together. It is an unique experience to walk around the Causeway. Your mind can’t help but wander to the legend of the giants, Finn McCool and Fingal. The story goes that that the Irish giant, Finn and the Scottish giant, Fingal got into a shouting match. Since they couldn’t cross the channel, they soon started hurling stones at one another. Finally Finn, in his anger, started pounding the ground and lifting huge amounts of earth, which made a crossing for Fingal to come fight. As Fingal crossed the channel Finn disguised himself as a baby. When Fingal saw such a big baby, he realized that the baby’s father must be massive. Fingal then fled, stomping on the path Finn had made which formed Gaints Causeway. 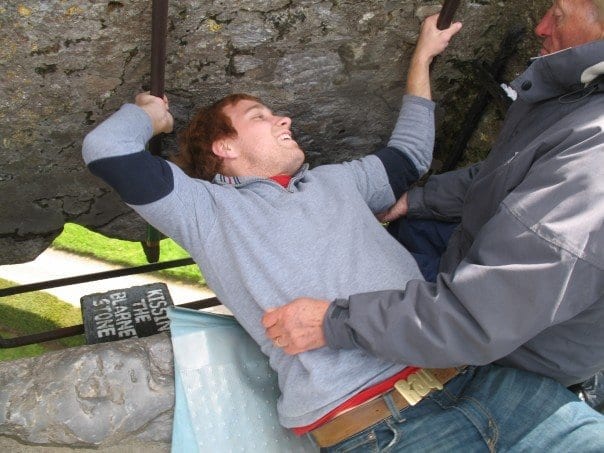 Almost everyone’s heard of this magical stone on top of Blarney Castel, but in case you haven’t, I’ll recap the legend. Whoever kisses the stone at the top of Blarney Castel will forever be endowed with the gift of gab; meaning it will make you a master of the skill of flattery. Blarney castle and the surrounding grounds are beautiful and worth the trip itself. The fact that you get to be part of a legend is just a bonus.

The Ring of Kerry is most popular and perhaps the most scenic drive in Ireland. Driving the narrow roads from Killarney to Killorglin is a great way to spend a day and gives you the chance to take in the beauty of the Irish countryside and the numerous landmarks. Don’t worry if you’re feeling too lazy to drive on your holiday; buses run tours around the ring throughout the year. If you love scenic views, this is perfect for you.   Ireland has some of the most stunning countryside I’ve ever seen. This place has shaped my life more than any other country, and I’m cant wait to return in October. Have you been to the emerald isle? What were some of your favorite things? Let you voice be heard in the comments below!

If the Ring of Kerry isn’t up your alley, then there is a lot of fun things to do on Dingle Penisuala which is close.

Ireland has a variety of options, but I would recommend looking for something unique like the wonderful self-catering accommodation of Sykes Cottages. These cottages are all over the countryside and will lend to the classic experience you came to Ireland for.

People from the United States, European Union, Australia, The EU or Canada; do not need a Visa to enter Ireland. If you are unsure whether this applies to you, view the list of Visa exempt countries here.

Northern Ireland is on the pound the rest of it is on the Euro.

What do you think? What are some things to do in Ireland that you like to do when you visit?

3 thoughts on “Travel Guide: Ireland Will Change Your Life”