How to Run with the Bulls And Survive.

So you want to know how to run with the bulls of survive to tell the tale. I’ve got fantastic news for you, I can help. It is one of the biggest adventures when backpacking Europe.

Most of the year Pamplona is a quiet little town in the northern part of Spain. However every year between July 6 -14th, during the San Fermain festival, this city is brought to life by thousands of tourists who flood here to join in the celebration, test their luck, and participate in the ancient tradition of the running with the bulls.

Every morning at 8 a.m. screams echo through the hazy town as panicked locals and tourists run in a hurried scramble 850 meters down a narrow cobble stone street, trying to stay out of the way of the charging massive bulls.

At the end of the run, stands the arena, every runner’s goal.

Here smaller bulls are given freedom and runners spend the better part of an hour trying to work up the courage to touch one without getting gored.

These “small bulls”, which stand as tall as your chest, can do some serious damage to anyone who doesn’t get out of their path in time.

However, if you are brave and lucky enough to actually place your hand on a bull, the arena fills with shouts and cheers that have been heard for hundreds of years.

The running of the bulls is chaotic and nothing you do will make it safe. However, these 5 simple rules will greatly increase your chances of surviving to drink another glass of sangria.

5 Tips on How to Run With the Bulls 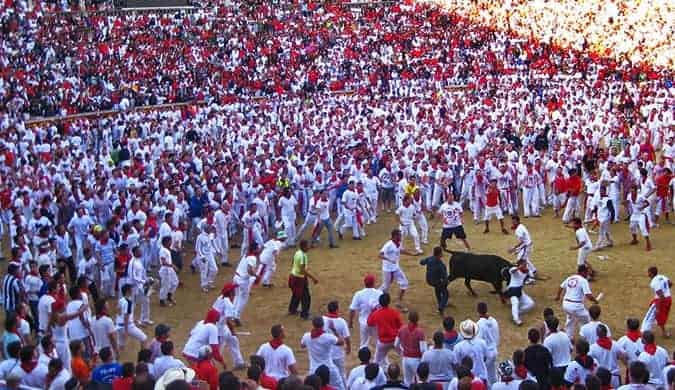 It seems like common sense on how to run with the bulls and survive, right? It’s not! A massive party rages nonstop during the entire festival. People party all night, some in search of courage to make the run. In the morning, some of them are too drunk to realize that they are too drunk to run.

Don’t be one of them.

A bunch of intoxicated people staggering down a narrow road with bulls chasing them is a recipe for disaster and causes injuries every year. In fact, if you’re beside someone who is drunk, move!

Chances are, they are going to fall and most likely take you down with them.

This goes against every instinct in your body, but it’s the single most important rule when running with the bulls.

If you try to get up, you only cause others to fall, causing a pile of runners; a sure target that is horn level. If you stay on the ground, people will dodge you.

Believe me, they don’t want to trip, but more importantly than people dodging you is that the bulls will jump over you.

Eventually someone will come and pick you up when the coast is clear. Or wait for the bulls to pass then get to the side.

You definitely don’t want to take chances when it comes to bull running, which is why you need to wear proper running shoes. A couple hours before the run begins, the street is swept, sprayed, and cleaned.

Hmmm… Sort of. You see what this really means is that the street is still wet and slippery when the bulls are let loose.

You need to make sure you have shoes with good tread so you don’t slip. In the unfortunate case that you do slip, refer to rule two. Having proper footwear is key in knowing how to run with the bulls.

Every year in the arena, some tourist tries to prove how manly they are by touching a bull’s head or by pulling a bull’s tail. Don’t ever do this! This festival is sacred to the Spanish people and if you disrespect the bulls, they will disrespect you.

This year I saw two people foolish enough to attempt this. One jumped on the bull and tried to ride it while the other pulled at the tail. Within seconds the locals had pulled them off and were giving them the beating of their lives. In the arena, it’s ok and even encouraged to touch the bulls, but do not grab their horns, slap their face, or pull their tail. You’re not just making the Bulls angry but also the locals.

5. The bulls Might Be the Least of your Problems

Yes, you are running with the Bulls, but so are a lot of other people, and guess what — they are all panicking. It is every man for himself and a lot of the time, the people can be more dangerous than the bulls.

You have to watch out for your fellow runners who will injure you unintentionally. You also have to look out for trash.

They clean the street every morning before the bulls run, but some rubbish still remains. Watch your step so you don’t end up on the ground.

Always remember: you have to take precautions and know what you are getting yourself into. San Fermin is a fun festival and it is easy to get carried away in the party, and if you are going to participate, you need to take it seriously because the bulls don’t take jokes well.

What do you think of how to run with the bulls and survive? Is this an adventure you would undertake?